1820 The Works of Samuel Johnson 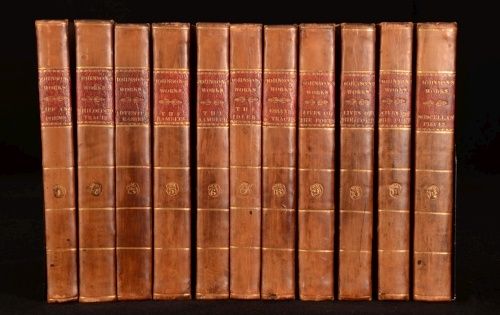 Includes a frontispiece to the first Volume. An Essay on the Life and Genius of Samuel Johnson, LL. D. was written by Arthur Murphy (27 December 1727 – 18 June 1805), also known by the pseudonym Charles Ranger, and published in 1792. The work serves as a biography of Samuel Johnson and an introduction to his works included in the volume. Murphy also wrote a biography for Henry Fielding in a 1762 edition of his Works and a biography for David Garrick, the Life of David Garrick, in 1801. Samuel Johnson (September 1709 - 7 September] – 13 December 1784), often referred to as Dr Johnson, was an English author who made lasting contributions to English literature as a poet, essayist, moralist, literary critic, biographer, editor and lexicographer. Johnson was a devout Anglican and committed Tory, and has been described as "arguably the most distinguished man of letters in English history". Volume one being his 'Life and Poems', Volume two, 'Philological Tracts'. Volume three, 'Adventurer and Rasselas'. Volume five and six being the second and third part of 'The Rambler'. Volume seven contains Johnson's series of essays named 'The Idler'. Volume eight contains 'Essays, Tracts, and Journey'. Volumes nine, ten and eleven contain the complete set of 'Lives of the Poets' and Volume ten is a collection of 'Miscellanious Pieces'. Contained within are Volumes I, II, III, V, VI, VII, VIII, IX, X, XI and XII of 12 Volumes. Only Volume IV is missing.

In half calf bindings with marbled boards. Externally, in smart condition with just some minor marks. Some shelfwear to the top and tail of the spine and three instances of ink markings to the gilt lettering. Internally, firmly bound, bright and generally clean with some occasional light spots. Some dusting to the text block edges which has carried onto the margins.