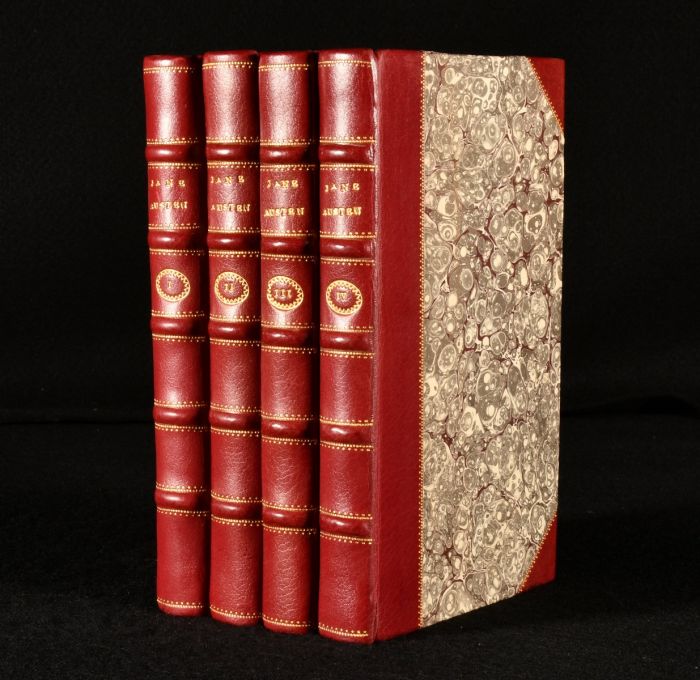 In beautiful recent half calf bindings, with marbled paper boards.  The title pages state 'By the author of 'Pride and Prejudice', 'Mansfield-Park' &c'. The biographical preface to the first volume is written by Henry Austen, and is the first public acknowledgement of Jane Austen being the author of all her novels. Collated, the half-titles and final blanks to volume IV have been discarded, as is common with rebound works. These two novels were published posthumously. Northanger Abbey is a Gothic novel parody, which was drafted by Austen fifteen years earlier under the working title 'Susan'. She had initially sold it in 1803 to a London bookseller, but the work was not printed. She abandoned her efforts following the publication of another novel under this name in 1809. Persuasion was completed by Austen in the summer of 1816 before her writing efforts had to cease due to ill-health. Scarce in such a beautiful condition. 'Northanger Abbey' is a satire of Gothic novels, and revolves around Catherine Morland whose journey follows her understanding of the world and those around her. 'Persuasion' concerns Anne Elliot, the 27 year old protagonist whose family moves to lower their expenses. This novel is often regarded as Austen's most maturely written novel. Austen's novels mark the transition to nineteenth century realism from the novels of sensibility that dominated the late eighteenth century. Her biting irony, humour and social commentary have lead her novels to be in high standing centuries later. A fine example of this important piece of the English literary canon.

In half calf bindings, with marbled paper covered boards. Externally, in an excellent condition with minor shelfwear. Internally, firmly bound. Pages are bright, with occasional light spots, heavier to the first and last few pages.