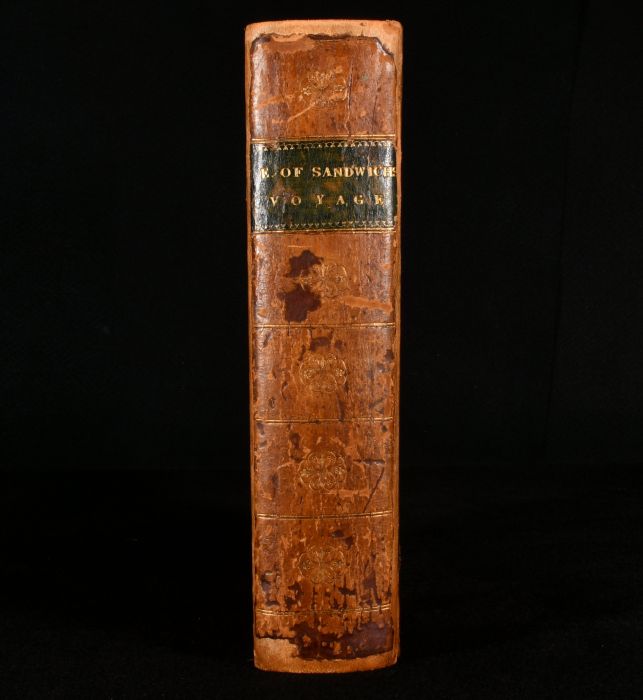 The first edition of this work. Illustrated with a frontispiece, one hand-coloured folding map, and twenty-five plates. Collated, complete. ESTC citation number T98245. This work is a quarto, with the signatures running as [2], a-z4, AA-ZZ4, AAA-YYY4, ZZZ2. Prefixed with a memoir of the author's life, written by John Cooke, who was Sandwich's chaplain, and one of the chaplains of Greenwich Hospital. This work documents John Montagu's, the 4th Earl of Sandwich, experiences during his early eighteenth century Grand Tour around Continental Europe. He undertook this tour after he graduated Trinity College Cambridge. He visited what were considered to be stranger and unusual destinations during his tour, as they were part of the Ottoman Empire, such as Greece, Turkey, and Egypt. The tour took a year, and he undertook it with a small group of friends. In Constantinople, he studied the language and customs of the country. On the return of the journey he was full of new information with learned manuscripts and a collection of antiquities. It provided him with his reputation as a traveller and scholar, due to it being an unusual and dangerous voyage. Later in his life Sandwich founded a number of Orientalist societies. Bookplate of Henry Holdsworth to the front pastedown.

In a full mottled calf binding, rebacked with the original spine and boards laid down. Externally, snart. Light rubbing and surface cracks to the spine. A few light marks to the boards. Minor bumping to the extremities. Bookplate of Henry Holdsworth to the front pastedown. Internally, firmly bound. Pages are bright and generally clean with only the odd light spot. Small repair to the frontispiece, not affecting image. Small marginal closed tears to the head of pages 149/150 and 385/386, with no loss.