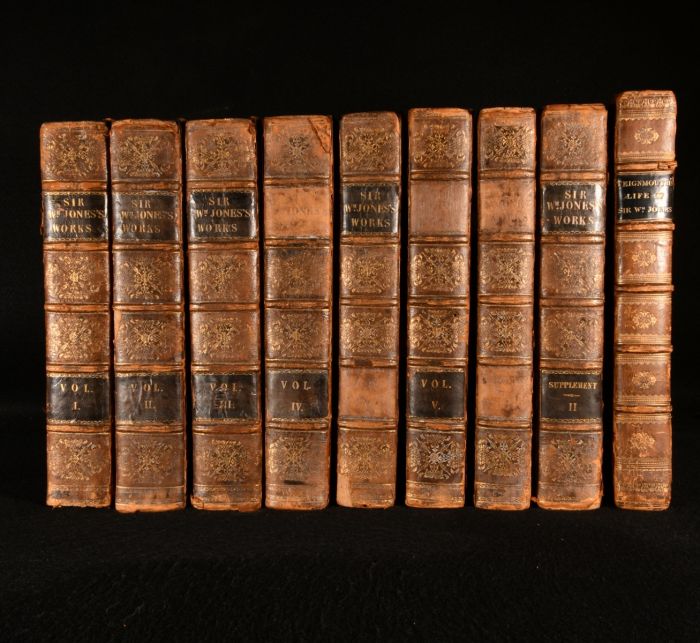 Complete in eight volumes, with the two scarce supplemental volumes present, all in a uniform binding, and an additional volume being the Jones biography by Lord Teignmouth.

Volume I illustrated with a frontispiece, three folding plates, and twenty-six plates.

Supplement Volume II illustrated with one map, and seven plates.

'Memoirs of the Life, Writings, and Correspondence of Sir William Jones', a biography by Lord Teignmouth. The first edition of this work, published by John Hatchard in 1804. Half-title is present. Illustrated with a frontispiece, and one plate.

Sixty-seven leaves of Persian text to the rear of Volume III.

The collected works of Sir William Jones, published only a few years after his death.

Jones was noted for being a scholar of ancient India, coining the term Indo-European in his studies on the existence of a relationship between the European and Indo-Aryan languages. He was also a philologist.

These volumes contain Jones' historical studies, as well as his exploration into global languages. The works offer a fascinating insight into the study of other countries during the eighteenth century, at a time in history where the British Empire was expanding and the public was gaining greater interest into the history of the wider world.

Teignmouth was a close friend of Jones, and succeeded him as the president of the Asiatic Society of Bengal on the 22nd May 1794.

In a full diced calf binding, biography volume in a full calf binding. Externally, with some rubbing to the boards and spines. Lacking spine labels to Volumes IV, V, VI, and Supplement Volume I. Light wear to the head and tail of the spines and to the extremities. A little loss to the tail of the spine of Volume V. Cracks to the joints, resulting in the joints to be starting. Minor marks to the boards and spines. Small chip to the spine of Volume II. A little loss of leather to the front board of Volumes III and VI. Bottom spine label of Volume III is a little worn.Small chip to a raised band of Volume V. Head of the spine of the biography is lifting a little. Rear joint of Volume II is strained. Hinges of Volume I are strained. Front hinge of Supplement Volume II is starting but firm. Front hinge of the biography is strained but remains firm. Internally, firmly bound. Pages are bright for their age and generally clean with some scattered spots, spots mostly to the plates.. Stamp to the title pages. Repair to the head of the title page of Volume II, not affecting text. Page 493 of Supplement Volume I has been repaired. Marks to the last few pages of the biography volume.