The store will not work correctly in the case when cookies are disabled.
By William Beckford
London   J Johnson
8" by 5" [3], iv-vii, [1], 2-334pp
A very smart, first edition of this extremely important and influential Gothic novel, Vathek. In a lovely tree calf binding.
By William Beckford

1786 Vathek An Arabian Tale from an Unpublished Manuscript 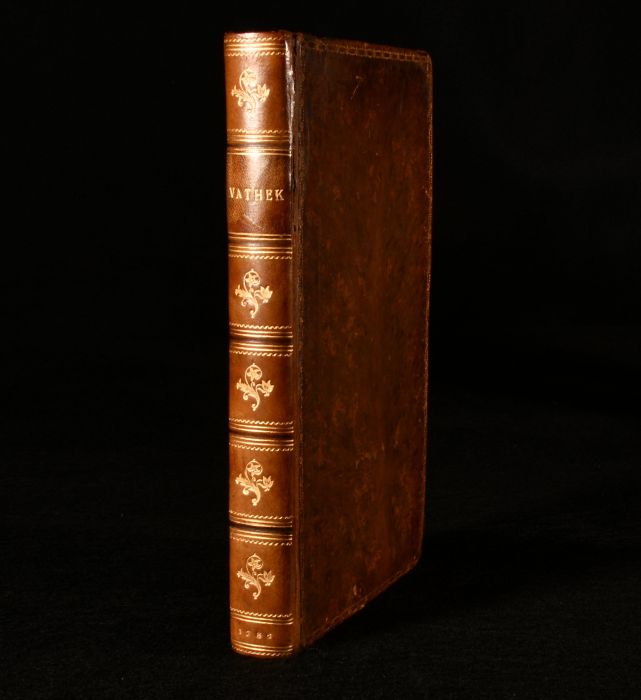 An influential novel, which was the source of Lord Byron's poem 'The Giaour'. He also cites Vathek in 'Childe Harold's Pilgrimage'. Other Romantic poets took inspiration from this work, and set their own titles in the Middle East. H.P Lovecraft is another author who held Vathek in high esteem. His unfinished novel 'Azathoth' was inspired by Vathek, as was his 'The Dream-Quest of Unknown Kadath'. This is the true first edition. Beckford originally wrote this novel in French, and it was translated by his friend the Rev Samuel Henley, who contributed to the critical and explanatory notes. Chapman notes that Beckford wished for a French edition to appear first, as stated in a letter to Henley dated 9 February 1786. However, this English edition (published June 1786) was published prior to the French edition of December 1786, which was post-dated 1787. Despite his anger at Henley's publication of the English language edition, he appreciated his expertise as an orientalist and retained his notes in subsequent editions. Henley claimed that this novel was translated directly from Arabic to hide the true author. Beckford stated that Vathek was written as an emotional response to Christmas at Fonthill in 1781. He, in the fashion of the eighteenth century, had prepared Oriental inspired entertainment at his country estate with the assistance of renowned set designer Philip James de Loutherbourg. At the time of writing, Orientalism had heavily influenced European culture. The novel is titled as an 'Arabian tale' because of its depiction of oriental cultures, societies and myth. As a Gothic novel, Beckford experiments with the supernatural, ghosts and spirits. It uses a third person, omniscient and semi-intrusive narrator. With the errata. A very bright copy of this work. Page 48 is misnumbered 84 as called for. Sympathetically rebacked with the original boards preserved. William Beckford was a notable author, art collector and sometime politician. He built the now lost Gothic Revival country house, Fonthill Abbey and 'Beckford's Tower', an architectural folly in Lansdown, Bath. A very smart first edition copy of this important and classic novel.

In a full tree calf binding. Rebacked, with the original boards preserved. Externally, very smart, with light rubbing to the extremities and joints. Two small indentations to the head of front and rear boards. Internally, firmly bound. Pages are very bright and clean.