The store will not work correctly in the case when cookies are disabled.
By Captain James Cook
Dublin   H. Chamberlaine, et al
8.5" by 5" [15], 2-549; [13], 2-559pp
The first Dublin edition of the account of James Cook and James King's monumental voyage, in a very bright condition for it's age.
By Captain James Cook

1784 A Voyage to the Pacific Ocean. Undertaken, By the Command of His Majesty, For making Discoveries in the Northern Hemisphere, to Determine the Position and Extent of the West Side of North America; its Distance From Asia; and the Practicability of a Northern Passage to Europe. Performed Under the Direction of Captains Cook, Clerke, and Gore, in His Majesty's Ships the Resolution and Discovery. In the Years 1776, 1777, 1778, 1779, and 1780. 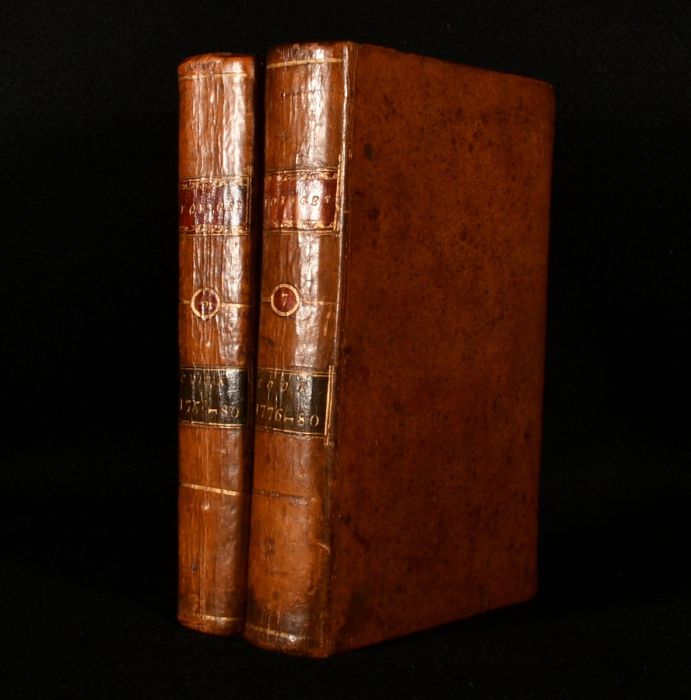 Fascinating accounts of the voyage of James Cook and James King, exploring the Pacific Ocean and the Northern Hemisphere.

Cook is known for making the first recording of European contact with the eastern coastline of Australia, and the first recorded circumnavigation of New Zealand. This volume recounts his journey, as well as his exploration of North America.

King was a Royal Navy officer who served under Cook under his voyage around the world. King's job on this voyage was taking astronomical readings using a sextant, and leading the ships after the death of Cook. This work shows King finishing Cook's account of the voyage.

Illustrated with one folding table.

Incomplete in two volumes, being Volumes II and III of a total of three volumes, thus lacking Volume I.

In a full calf binding. Externally, smart. A few minor marks to the boards and spines. Light bumping to the head and tail of the spines and to the extremities. Small bump to the front board of Volume II. Internally, generally firmly bound. Pages are bright and clean with just a couple of light spots. A little edgewear and discolouration to the folding map to Volume II. Very bright for its age.