1784 The Works of Henry Fielding, Esq. With the Life of the Author 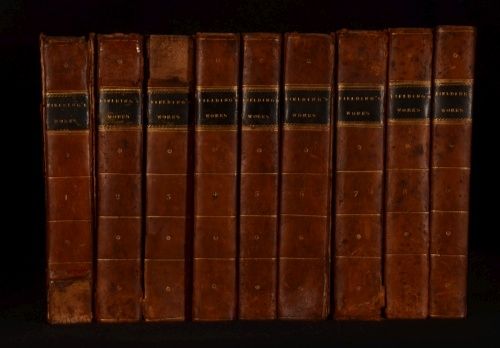 New edition, to which is added The Fathers, or, The Good Man Containing Love in Several Masques, The Temple Beau, The Author's Farce, The Pleasures of the Town, The Justice Caught In His Own Trap, Tom Thumb the Great, The Letter Writers, The Grubstreet Opera, The Lottery, The Modern Husband, The Mock-Doctor, The Covent Garden Tragedy, The Debauches, The Miser, The Intriguing Chambermaid, Don Quixote in England, The Virgin Unmasked, The Universal Gallant, Pasquin, The Historical Register, Eurdice, Eurydice Hiss'd, Tumble-Down Dick, Miss Lucy in Town, The Wedding-Day, The Fathers, The Life of Jonathan Wild, A Journey From This World to the Next, The History of the Adventures of Joseph Andres, The Preface to David Simple, The Preface to the Familiar Letters Between the Principal Characters in David Simple and Some Others, The History of Tom Jones, A Foundling, Philosophical Transactions, The First Olynthiac of Demosthenes, Of the Remedy of Afflication for the Loss of Our Friends, A Dialogue Between Alexander the Great and Diogenes the Cynic, An Interlude Between Jupiter, Juno, Apollo and Mercury, The True Patriot, The Jacobite's Journal and Amelia. With frontispieces to each volume. Fielding never stopped writing political satire and satires of current arts and letters. His Tragedy of Tragedies of Tom Thumb (for which Hogarth designed the frontispiece) was, for example, quite successful as a printed play. In 1743, he published a novel in the Miscellanies volume III (which was the first volume of the Miscellanies). This was The History of the Life of the Late Mr Jonathan Wild the Great. This novel is sometimes thought of as his first because he almost certainly began composing it before he wrote Shamela and Joseph Andrews. It is a satire of Walpole that draws a parallel between Walpole and Jonathan Wild, the infamous gang leader and highwayman. He implicitly compares the Whig party in Parliament with a gang of thieves being run by Walpole, whose constant desire to be a "Great Man" (a common epithet for Walpole) should culminate only in the antithesis of greatness: being hanged. His greatest work was Tom Jones (1749), a meticulously constructed picaresque novel telling the convoluted and hilarious tale of how a foundling came into a fortune. Nine volumes of ten only (missing volume X)

In full tree-calf bindings. Externally sound, though with some rubbing. Two joint failed, with boards detached, and four joints tender. Five joints starting. Loss to backstrip of volume III, with five other backstrips lifting. Internally, firmly bound. Pages have some foxing throughout. Offsetting to endpaper of volume I. Ink signature to front pastedown of volume VII.