The store will not work correctly in the case when cookies are disabled.
By Thomas Salmon
London   E. Ballard; et al.
7" by 4" xliii, unpaginated
Thomas Salmon's work on the geography of the world in the eighteenth century, with seven folding maps.
By Thomas Salmon

1782 The Modern Gazetteer: or, a Short View of the Several Nations of the World. Absolutely necessary for Rendering the Public News, and Other Historical Occurrences, Intelligible and Entertaining. Containing, I. An Introduction to Geography; with Directions for the Use of the Terrestrial Globe. II. The Situation and Extent of all the Empires, Kingdoms, States, Provinces, and Chief Towns, in Europe, Asia, Africa, and America: Also, a Description of the Most Considerable Seas, Lakes, Rivers, and Mountains, all Ranged in Alphabetical Order. III. The Produce, Manufactures, Tarde, Constitution, Forces, Revenues, and Religion, of the Several Countries. IV. The Genealogies and Families of the Emperors, Kings, and Princes, Now Reigning. 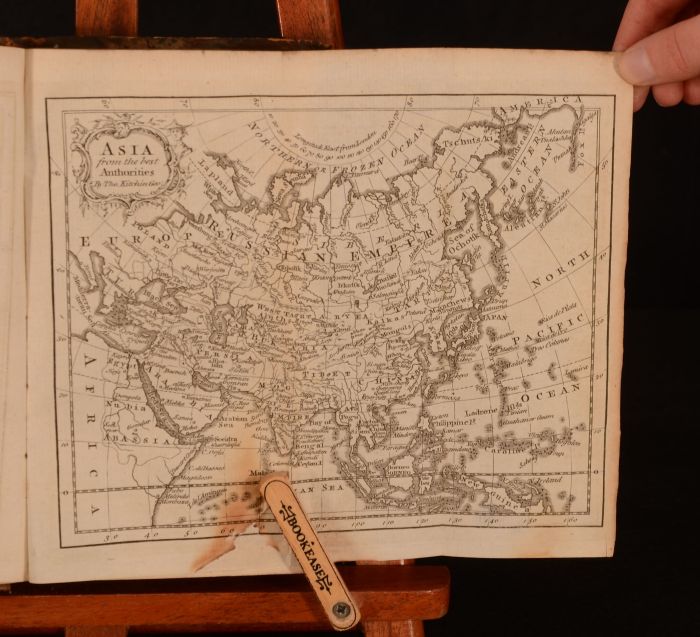 This work is a geographical index to the world, written in the eighteenth century, giving an interesting look at the form and beliefs of how the world was structured at the time. With a folding map to the frontispiece, and a further six folding maps. Showing folding maps of the World, Europe, Asia, Africa, North America, South America, and Germany. Written by Thomas Salmon. Salmon was a historical and geographical writer, who travelled vastly around Europe and accompanied George Anson on his voyage around the world. Collated, complete.

In the original half calf binding with marbled paper to the boards. Externally, generally smart. A little rubbing to the boards and spine. Minor bumping to the extremities. Light surface cracks to the spine. Internally, firmly bound. Pages are bright and clean. Folding map of Germany with some age-toning and edgewear to the fore edge. Scorch mark to the bottom edge of the folding plates of Europe and Asia, affecting a small portion of the image to the folding map of Europe, with light discolouration, as well as having repairs with an additional leaf adhered to the reverse.