The store will not work correctly in the case when cookies are disabled.
By Not Stated
Dublin   Peter Wilson
7" by 4" [4], v-xxxviii, unpaginated
The second edition of this extensive Irish gazetteer, illustrated with four large detailed folding maps.
By Not Stated

1759 The Universal Gazetteer: or, a Description of the Several Empires, Kingdoms, States, Provinces, Countries, Cities, Towns, Seas, Lakes, Rivers, Mountains, Volcanoes, &c in the Known World. Together With an Account of the Extent, Produce, Revenue, Forces, Trade, Manufactures, Religions, &c. of the Several Countries; and of the Battles, Sieges, and Other Transactions That Have Rendered Them Remarkable. 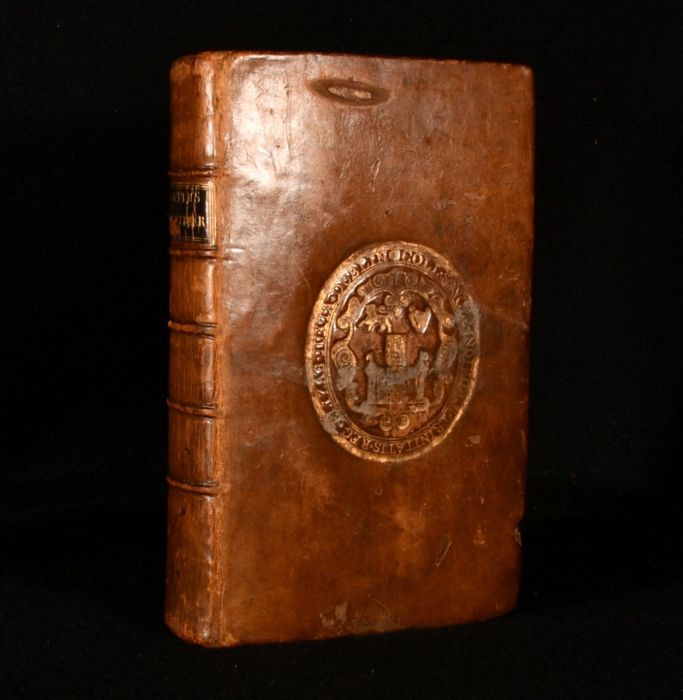 The second edition of this work.

Six leaves of publisher's adverts to the rear.

An extensive gazetteer, offering an unique insight in the known world as it was in the mid eighteenth century, at a time when people were still exploring and discovering more about the Earth.

This work was praised by the lexicographer Benjamin Martin, who compiled one of the early English dictionaries, the 'Lingua Britannica Reformata'.

Published by Peter Wilson, a Dublin bookseller based on Dame Street. He is known for having published the first trade directories in Ireland.

In a full calf binding, the armorial binding of Trinity College Dublin. Externally, generally smart. A small amount of loss to the fore edge of the front board, and to the head of the front board. Minor marks to the boards and spine, with a couple of small tidemarks. Small chip to the spine label. Light bumping to the extremities. Minimal surface cracks to the spine. Prior owner's ink inscription to the recto to the front free endpaper. Internally, firmly bound. Pages are very lightly age-toned and clean, with just a couple of light spots. Tear to the fold of the folding map of Europe, and Asia. Light spots to the folding maps.