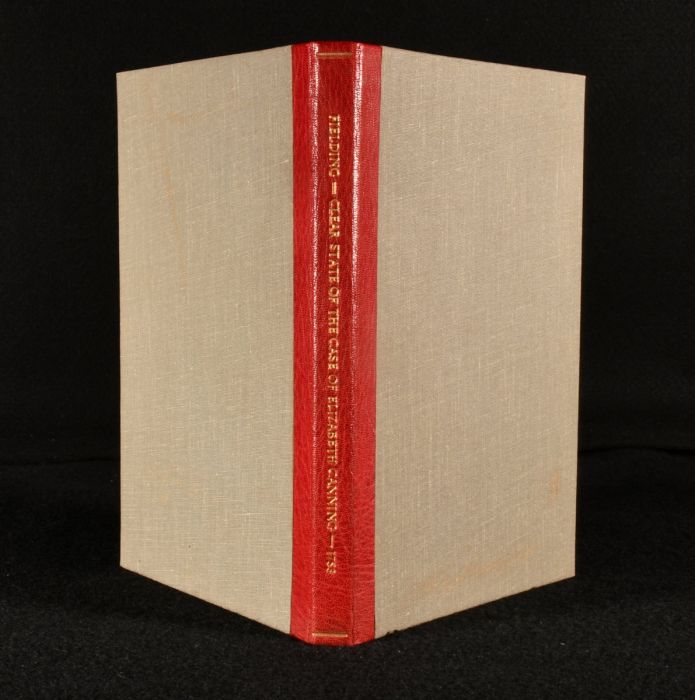 Disbound, as issued. Held in a custom clamshell box.

Elizabeth Canning disappeared from her mother's home in 1753. She appeared weak and starved following her reappearance a month later. Her account of what happened became a popular topic for coffee-house pamphlets, with over forty pamphlets issued in 1753-1754. Canning stated she was robbed on her way home from a relative's, and taken forcibly to a house in Enfield Wash. It was there she was robbed of her clothes and held captive in an unheated room for a month. She escaped through a window and walked to her mother's house.

This work was published in the final years of Fielding's life when there had been a considerable deterioration in his health. The case of Elizabeth Canning piqued Fielding's interest due to his experience in criminology and his story 'Amelia' which shared parallels. Fielding was responsible for taking Canning's sworn testimony and he was impressed with her modesty and genteel manner. He then issued a warrant for the detention of her alleged captors Wells and Squires. They were found guilty at trial, although the Chief Magistrate of London was dissatisfied and re-opened the case, resulting in Canning's conviction for perjury.  This work is written in defence of Elizabeth Canning and resulted in replies from his enemies.

A central publication to this important trial.