The store will not work correctly in the case when cookies are disabled.
By Longus
Paris   Not Stated
6.5" by 4.5" [10], 164pp
The scarce 'Regent' edition of Daphnis et Chloé, with illustrations from Benoit Audran and Philippe Charles d'Orléans.
By Longus 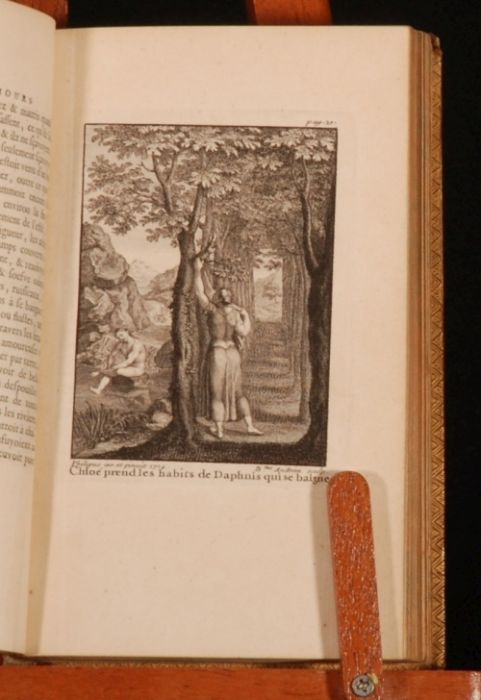 Bound in the original leather with gilt lettering and decoration. Scarce. A very important work, of which only 250 copies were said to have been printed. Here in the original leather binding and exceptional unrestored condition. The plates are engraved by Benoit Audran after Phillipe d'Orleans, Regent of France from 1715, under the instruction of Coypel in 1714, with the frontis after Coypel himself. Without 'des Petits Pieds' from the 1728 edition which sometimes is bound in later but is not meant to be in the original first edition as it was suppressed until 1728. This is clearly the original binding and is untouched. Collated, complete. With 'Bibliotheque de Mr A. Houbigant' bookseller labels on the front and rear pastedowns. Daphnis and Chloé is the only known work of the 2nd century AD Greek novelist and romancer Longus. Its style is rhetorical and pastoral, its shepherds and shepherdesses are wholly conventional, but the author imparts human interest to this idealized world. Daphnis and Chloe resembles a modern novel more than does its chief rival among Greek erotic romances. Longus was a Greek novelist and romancer, and author of Daphnis and Chloé. Very little is known of his life, and it is assumed that he lived on the isle of Lesbos, the setting for Daphnis and Chloe, during the 2nd century AD. It has been suggested that the name Longus is merely a misinterpretation of the last word of Daphnis and Chloe's original title in the Florentine manuscript. If his name was really Longus, he was probably a freedman of some Roman family which bore that name as a cognomen. Benoit Audran, 1661 - 1721, was a French artist and engraver, from a family of French artists. Philippe Charles d'Orléans, petit-fils de France, Duke of Orléans, 1674 – 1723, was a member of the royal family of France and served as Regent of the Kingdom from 1715 to 1723. He was known from birth under the title of Duke of Chartres. Named regent of France for Louis XV until he attained his majority in February 1723, the era of his de facto rule was known as the Regency. His life was marked by a military, political and courtly career. He is referred to historically as le Régent. The city of New Orleans, in Louisiana, U.S., is named after him.

In original calf binding with gilt stamping to spine. There is some mid wear to the extremities, including some mild bumping and rubbing. The hinges are just starting but still firm. The binding is tight and firm. Internally the pages are clean and bright, with only the very occasional spot, most prominent in the first few pages. Overall the condition is VERY GOOD INDEED and totally unrestored.