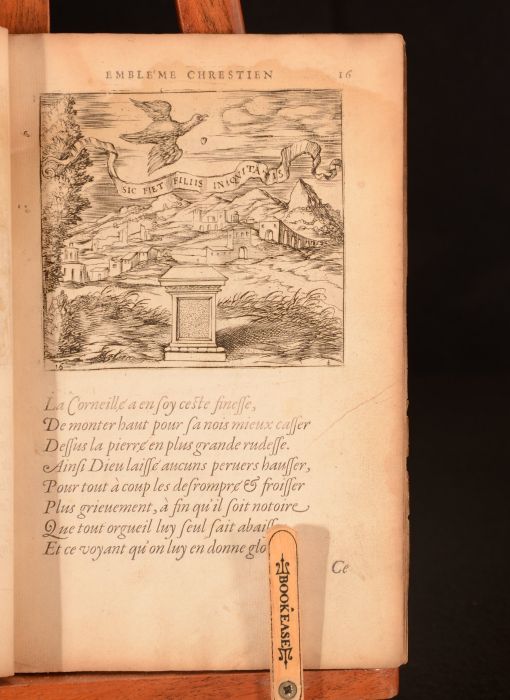 A very scarce edition of Georgette de Montenay's 'Emblemes ou Devises Chrestiennes'. 'Emblemes' contains one-hundred emblems, which are typically morals or poems accompanied by illustrations, a form of religious text that was very popular during the 16th and 17th centuries. Montenay's 'Emblemes' are mostly Protestant in their views. An undated copy. ESTC and Copac only have records of the 1619 polygot edition, which differs to this copy in pagination and translation content. The 1619 edition is ESTC record no. S94206. This copy is lacking the title page (A1) and leaves F3 and F4. 1619 edition has a preface and a riddle to the rear, of which this copy is potentially lacking but there is no evidence to the gatherings that this printing had the preface. When collated using the catch-words this copy is lacking pages one, four, twenty-eight, twenty-nine, seventy-four, seventy-eight, seventy-nine, eighty, eighty-one, eighty-two, eighty-five, eighty-six, eighty-nine, ninety-five, and ninety-six. Closed tears to the fore edge of pages twenty, forty, and forty-one. It's unclear when the 'Emblemes' were first published, as there's been evidence of copies existing as early as 1561, despite it being originally thought to have appeared in publication in 1571. It is possible that, due to the religious turmoil at the time, the publication was delayed. The turmoil in question was the French Wars of Religion between the Roman Catholics and Huguenots between 1562 and 1598. Montenay herself was of the Reformed/Calvinist faith. Montenay was taken into the court of Jeanne d'Albret, the Queen of Navarre, after becoming orphaned. This allowed her access to education in the classics and religion. D'Albret was the political leader of the Huguenot movement, as was a key figure in the French Wars of Religion. 'Emblemes' has been translated widely since it's original publication, with a polyglot edition being published in 1619 with the translation in Spanish, Italian, German, English, and Dutch, as well as previously being translated into Latin. With engravings by Pierre Woeiriot. Woeiriot was a French artist, who started life following his family trade of goldsmith, before he decided to focus solely on engraving. He was also practised in painting, sculpting, as well as being a medallist. He illustrated 'Pinax iconicus antiquorum ac variorum in sepulturis rituum', 'Livre d'anneaux', and an edition of the Old Testament for Antoine God. 'Emblemes' was the first emblem book to use incised engravings rather than woodcuts. Collated, incomplete.

Disbound with both boards lacking, though with the spine still attached. Externally, generally smart. Rubbing has caused some slight loss to the head and tail of the spine, as well and a little discolouration. There is slight age-toning, marking, and spotting to the recto of the front leaf and to the verso of the rear leaf, with a few closed tears. Prior owner's pencil and ink inscription to the recto of the front leaf. Front leaf is lifting at the gutter but remains firm. Binding to rear blank leaf is weak and may detach with further handling. Prior owner's ink inscription to the verso of the front page. Internally, firmly bound. Pages are age-toned, with the odd spot and mark throughout. Offsetting to the verso of pages due to the illustrations. A couple of closed tears and evidence of worming to page i/ii. Lacking pages one, four, twenty-eight, twenty-nine, seventy-four, seventy-eight, seventy-nine, eighty, eighty-one, eighty-two, eighty-five, eighty-six, eighty-nine, ninety-five, and ninety-six. Closed tears to the fore edge of pages twenty, forty, and forty-one. Closed tear to the bottom of pages forty-two, forty-three, forty-four, fifty-seven, and seventy-two. Chip to the bottom of page thirty-nine, and to the fore edge of page sixty-five however not affecting text. Repairs to pages thirty-five, thirty-six, and thirty-eight, which have scoremarks from attempted illustration removal. Four of the illustrations have been laid back in by being adhered to a second leaf, which has been pasted and bound to the original leaf in order to restore integrity. Pin to page thirty-three, attaching plate to page and leaf behind. Closed tear to partially repaired in the middle of page sixty-eight, with the engraving adhered to another leaf.